Triton, Neptune's largest moon, orbits the planet in just under six days. In November 2017 I had six clear nights in a row, and combined the nightly images to make this very short movie. Note that Triton's path appears to be an ellipse. Like most larger bodies in the solar system, Triton follows a circular orbit around Neptune. However, Triton's orbit is tilted by a whopping 130 degrees, so we're seeing its orbit at a angle, making it appear to be elliptical.

This comet was discovered in Sept. 2012 by the automated ISON telescope as a faint, slow-moving smudge. Although faint comets are a common discovery today thanks to a number of amateur and professional surveys, analysis of this comet's orbit revealed a surprise. Calculations showed that Comet ISON is destined to tightly skim the sun in November 2013, passing just 1.2 million km (725,000 miles) above the sun's visible disk. Such a close encounter puts it in the class of comets known as "sun-grazers." Sun-grazers have the potential to become very spectacular as the sun's heat boils off large amounts of gas and dust. Comet brightness calculations are notoriously uncertain (remember Comet Khoutek in 1973?) but if Comet ISON matches predictions it should be a spectacular sight in the fall of 2013. It may even be visible in daylight for a few days. Currently, though, it's a tiny, slightly fuzzy 17.3 magnitude speck in the constellation Cancer. The image below is a stack of three 180 second unfiltered exposures with the 25cm (10 inch) scope at RHO. Still beyond the orbit of Jupiter, if predictions are correct it will rapidly brighten next summer as it rushes sunward, increasing in brightness by a factor of a few million or more. 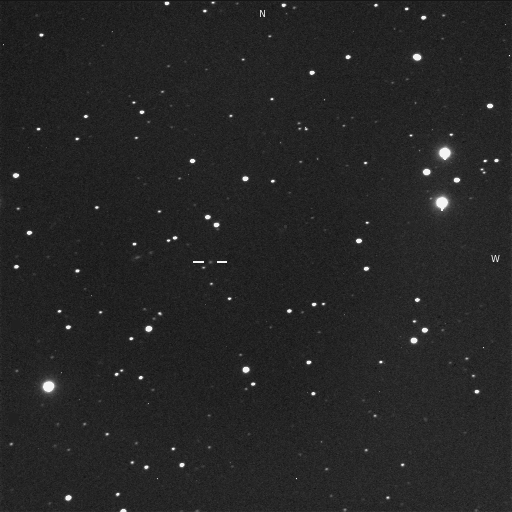 U Scorpii in Outburst

The recurrent nova U Scorpii was detected in outburst on 28 Jan 2010 by Barbara Harris and confirmed independently by Shawn Dvorak. This star is one of only 10 known repeating novae in the Milky Way and has the shortest interval between outbursts. On average U Scorpii erupts once every 10 years, increasing in brightness by a factor of 10,000 (10 magnitudes) in less than a day. Professional astronomers have been anticipating this latest outburst because they hope to gather valuable information about the white dwarf by observing the system in multiple wavelenghts during outburst. Dr. Brad Schaefer, an expert on recurrent novae, predicted that U Scorpii would go into outburst in April 2009, plus or minus 1 year. He requested careful monitoring of the star from the AAVSO so astronomers would know as soon as the star went in outburst and could begin pointing earth- and space-based telescopes at the object.

A transit of the exoplanet WASP-14b across its parent star (USNO-B1 11118-0262485) was observed on 2009-04-21/22. The maximum depth of the transit light curve is just 0.012 mag so it's a fairly challenging target. The parent star is relatively bright and a suitable comparison star is nearby, which does make it doable for small telescopes. 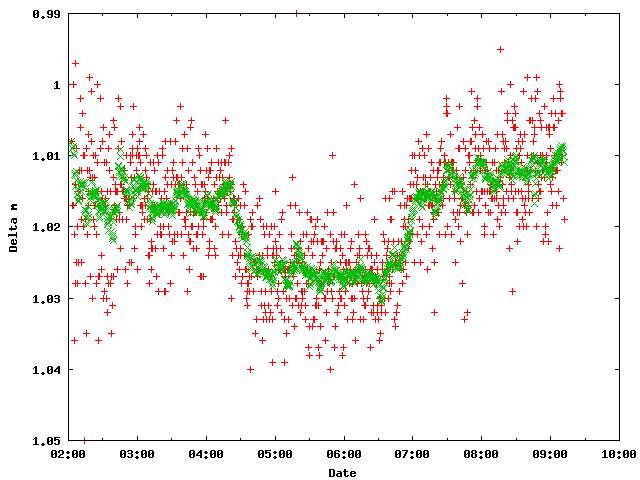 This bright eclipsing binary was discovered quite recently, by Dan Kaiser in 1988 (see IBVS 3196. This binary star is unusual in a couple of ways. It is composed of two supergiant stars, and has an unusually long orbital period of 1259 days (3.4 years). Because of the long period the eclipse phase, when one star is partially covering the other, lasts about 13 days. This star pair underwent its most recent eclipse in November and skies in Florida cooperated to allow me to collect a complete light curve with B and V filters. It did, however, required some extra diligence on my part because a few nights were quite cloudy so I had to get up several times in the middle of the night to look for an opening. 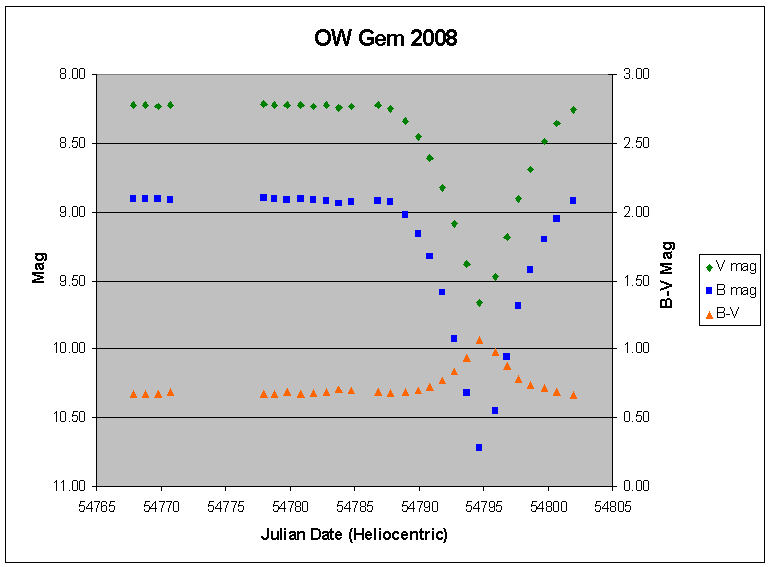 In recent years a number of large bodies have been found in our solar system's outer reaches. Many of these are as large or even larger than Pluto, and these discoveries are reponsible in part for Pluto's demotion to "dwarf planet" status.

Eris is one of these new dwarf planets, and is actually slightly larger than Pluto. Pluto is currently about 4.6 billion km (2.8 billion miles) from the Earth and is easily detected visually in large amateur scopes or with even modest telescopes equipped with CCD cameras. Eris is much further away, at 14.4 billion km (9 billion miles), and is therefore about 40 times fainter. This makes it a challenge for moderate-sized amateur telescopes even when equipped with a sensitive CCD camera.